French style furniture has long been a desirable accessory for the home, with its elegant connotations, quality craftsmanship and luxury feel. But the term ‘French’ can refer to two quite distinct furniture styles; read on to find out how to recognize them.

Many people use the umbrella term ‘French style’ to denote one particular type of furniture or home decor, when France is a country with a long and celebrated history of different design and artistic periods. However, in most cases, there are two styles that are used to inspire interior decoration today: Country or Provincial French, which has a charming, rustic look and Luxury French, which is often about the pre-Revolutionary styles associated with Louis XVI.

This fresh-faced and unashamedly sweet style of interior has become incredibly popular over recent years. Think checked cloth panels, unpolished wood and fabrics such as linen. Muted china blues and faded mustards are typical colours, as well as a prevalence of toile pattern on soft furnishings. It is not a strict design style but rather a loose and informal one, with only some general guidelines with which to get started.

While some Country French pieces could be called luxury furniture, this style is mostly about staying natural and understated, whether with a subdued colour palette, used furniture or untreated materials. Its often associated with the term ‘Shabby Chic’, which usually refers to furniture with deliberately distressed finishes and rough edges. 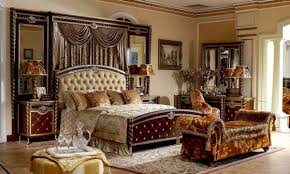 As a result of its DIY potential, this type of French-style home is easy to recreate, picking vintage one-off pieces, painting and sanding new furniture to give it a ‘used’ look and collecting old pottery and porcelain pieces for ornamental use.

During the 18th century, France led the way with its fashions, both in clothing and design tastes. Monarchs such as Louis XVI and his predecessors delighted in showing off their extravagant tastes to the world in chateaux and palaces, including Versailles. The main styles of the period were dramatic and flamboyant Baroque and later, more light-hearted Rococco.

When today’s designers recreate the drawing rooms of pre-Revolutionary France, you will usually see a lot of gilded picture frames, scrolled mirrors and ornate upholstery. As opposed to the pale and faded tones of provincial French, this rather regal French style includes a warmer, more golden palette, with rich tones, including rose, red and green and an apt use of lighting to create a soft, luxurious glow in the room.

Of course, the two styles are not strictly separate and tend to overlap, with luxury furniture such as antique cabinets and dressers being given the ‘distressed’ treatment or a simple country sleigh bed offset with an ornate mirror. Some also prefer the clean, classical lines of what’s often called the ‘Empire’ period, during Napolean’s 19th century reign. Whether you go for a linen tablecloth or a golden four-poster, there is always a certain elegance and refinement that transcends the different periods and designs; in other words, something that is quintessentially French.

AUTHOR BIO:
Jenny Tremayne is a freelance writer who specialises in architecture and design history, contributing to various sites on the web. She has conducted personal research into the French Baroque and Rococco periods and often uses sources such as www.juliettesinteriors.co.uk to see what revival styles are trending today.

Start a New Trend and Raise Value with Home Improvements